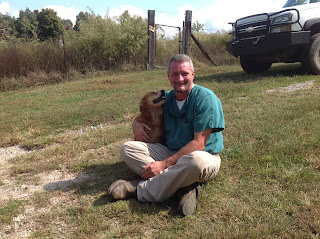 Above Photo:
Doc Tyree and Ginger, years after that Faithful morning.

The sound of the driveway bell after 8 a.m. that February morning sounded a bit more insistent than usual. As I was preparing for the day
ahead, "Ginger has been hit!", came the urgent cry from my doorway.

Ginger Buddy, was named for the color of her silky "ginger" colored fur and "Buddy", my Niece's dog, was her father. Ginger's mother was
"Faith" whom I had adopted from my Dad after he passed way.  Faith was a Golden Retriever/Shepard mix and loved to ramble in the woods by the stream
behind my house. The pair were forbidden to go out of the yard and past the driveway gate but would occasionally venture across the highway into the
blackberry brambles where the rabbits made their dens. My house was in a rural area and the traffic was only moderate.  I had gambled with that highway that
morning, and I had lost the bet.

I immediately rushed to the phone to dial our local Animal Hospital a few miles away. Pam, the Veterinary Assistant at the Addison Veterinary Hospital,
answered the phone and I explained the situation. "Bring her in right now!," she exclaimed.  Doc Tyree was still in the office, having been detained from a farm call that
morning by The Unseen Hand.

Ginger was placed onto a small tarpoleum and loaded into my van. She was
breathing rapidly and unresponsive. As she stared blankly into space I stroked her soft cheek. "You are going to be alright", I told her as she was sped to the Animal Hospital.

"Do you need some help?" asked Pam as she opened the door. Ginger's still form was cradled into a pouch formed by the tarpoleum as she was carried through the Animal Hospital's open
front door. She was still unresponsive as the screened door closed behind me. "Bring her in here." Pam indicated the exam room where Ginger was
placed, along with the tarp, on to the exam table. Doc Tyree came in and began his
examination.  As i anxiously observed bustle of activity of the veterinarians' office that morning,
it hadn't been a leisurely one.

The exam room was small so I stood outside the door gazing intently at Doc Tyree's
hands as he shaved a small area of fur from Ginger's chest to start her on I.V. fluids.

Her veins were collapsing. I heard him ask Pam for assistance, and then he added,
"If miss this vein I'll not find another one."

I sat down in a small chair outside of the exam room door and whispered a
prayer as I grasped the back of the chair, "Please, Father." I acknowledged that I
had been a permissive pet parent and this was my fault and I realized that Ginger
Buddy was not just a dog. She was my family.

Doc Tyree completed his exam and I prepared myself to make a decision to stop
her suffering. He indicated that Ginger was paralyzed and that it could be
temporary, or permanent. She had suffered two deep lesions, one to a fore paw, which
had exposed bone, and another to an inside leg. Her underbelly was raw red.

I heard Doc Tyree say, "We could give her a chance."

I looked up and humbly declared, "We'll give her a chance!"

He cradled her into his arms and as he carried my sweet little dog through a
door to a back room to place her on a heating pad for the night, I wondered if I
would ever see her again.  As the Gentle Doctor carried the suffering creature
through the doorway did I see Ginger wag her tail ever so slightly?

I called my Mom, and a dear friend, and then, with others, a prayer chain on Ginger's
behalf was formed...and an agonizing wait until morning.

"I couldn't believe it," said Pam, after answering my anxious phone call the next day. "I came into work this morning and Ginger was
on the heating pad standing up and wagging her tail!" A wave of relief swept away
the tension and calm pool receded into its place. She added, "I believe y'all had a
little help from above."

We all knew it. Ginger's trail on the way to complete healing was winding and riddled with
switchbacks, but she endured, we endured, "with a little help from above".
From the ringing of the driveway bell as a concerned young couple had witnessed the accident and had stopped to inform me, to the Unseen Hand that had delayed Doc Tyree's departure from the Animal Hospital that morning.

It was all part of a "Master" plan for the "Miracle Dog".