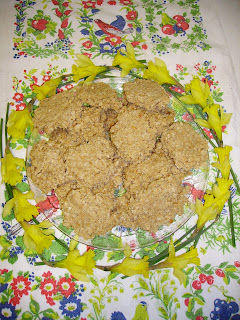 It was said of a certain Volunteer Regiment during the War Between The States that "lack of sweets" was one of the the leading causes of desertion during boot camp.  Never let that be said of this camp.

This recipe is fast, easy and delicious and all the ingredients are usually common in the kitchen pantry.

Oatmeal is a perfect food and Peanut Butter is great source of protein.

Heat sugar, milk, butter and cocoa on medium-high heat until boiling.  Boil 1 minute.  Remove from heat. Add peanut butter & vanilla. Stir in oatmeal and drop by spoonfuls onto waxed paper and let cool.  Yields 24. ( I like to use a wooden spoon for this recipe.)

This recipe is also known as Mud Pie or No-Bake Cookies. Our Moms made a lot of these type cookies back in the 70's when we were growing up.  Good for a fund-raiser type cookie also.

God bless,
Cheryl
Posted by Simple Life Farm at 11:04 AM No comments: 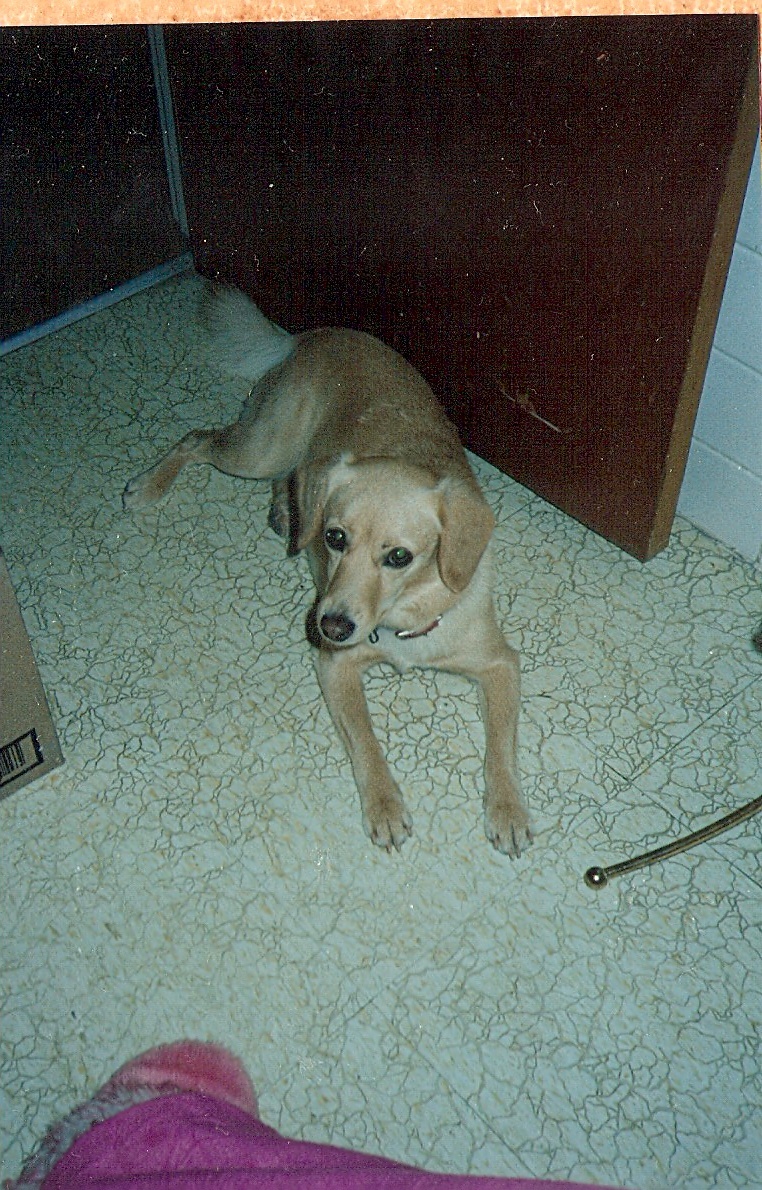 Dixie was a little dog that was the only blond, short-haired pup in a mixed litter of fuzzy, black puppies.

My Grandpa's "Squirrel" Dog, probably a Fiest mix, had given birth and the pups were ready to be weaned.  I was fresh out of college and had stopped for a quick visit home on my way to a new assignment on a corporate job. Grandpa asked me if I wanted to have a pick from the litter. I couldn't resist this little odd puppy with her shy, independent manner, a complete contrast to her gregarious litter mates. I named her "Dixie" and boy did she love to travel. This was a good thing because my new job took us to many different towns across the Southeast.

Dixie and me were constant companions.  She was there for me after I had put in long, hard days at work and there with me changing planes on a Holiday visit home. I was more concerned about my little dog making it into the cargo hold of the plane than I was my own luggage.  I got out of my assigned seat and stared out of the aircraft window until I saw her in the carrier I had purchased for her at the flight counter. She rode along the loading ramp and when she was safely inside the airplane I finally relaxed and sat down.

In one town where we lived I would even take my furry little companion to the laundry mat with me on wash day. We would share a hamburger from the little deli next door and have ice cream for desert.

I was a stranger everywhere I went, but Dixie, who never met a stranger, introduced me to people everywhere.

Dixie lived a full life. She enjoyed life here on the farm after we returned home to make a living. She did like to "go".  There was a time when I had not gone to the store for a few day and she went over to my brother's house and rode with him.  Squirrels had to head for the branches when she was around and an unsuspecting field mouse would not stand a chance with her.

I wasn't there when Dixie came into the world but I was there when she went out.  Saying "goodby" to my little friend was the hardest thing I had ever done in my life up to that time.  Dixie was the first creature I had ever been responsible for besides myself.  I did not know I had that many tears in my head.  I would not have traded one of those tears for the joy that this little canine companion had brought to me in her 12 years on the earth.

Pain is the payment for joy. Tears are the currency for which this debt is paid. Will our pets be with us in heaven?

How can they not be there?...
Posted by Simple Life Farm at 5:02 AM No comments: