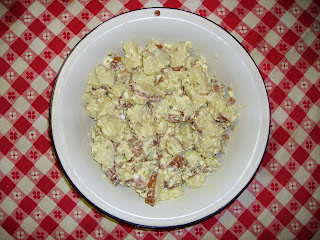 According to my youngest Niece this potato salad is the standard to which all other potato salads are measured.

Pour chopped potatoes into a small amount of boiling water and cover. Don't overcook. When potatoes are just fork tender pour off water and rinse potatoes with cold water. Toss with wooden spoon and sprinkle with salt. Let cool. Mash boiled eggs with a fork and combine with mayonnaise, mustard, salad pickles, celery and onion and toss with potatoes. Refrigerate and enjoy.

Choose ingredients that are naturally or organically grown for maximum nutrition.
Posted by Simple Life Farm at 5:16 AM No comments: 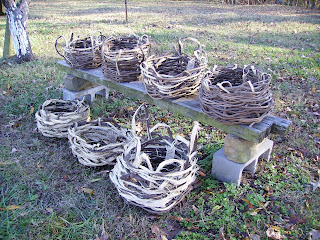 Patience is something you live with.
Posted by Simple Life Farm at 1:00 PM No comments: 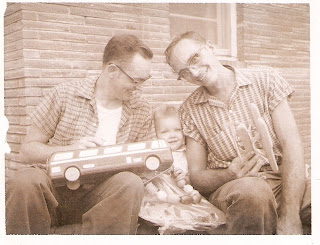 L-R Uncle Robert, Me, My Dad

When I was a kid during the 1960's and 70's visiting my Grandmothers house in Ensley, Alabama in Birmingham I remember a framed military picture of my Uncle Robert sitting behind a desk. He was a bachelor and worked as an Industrial Engineer at the Fairfield Works of U.S. Steel where his Dad and brother, my Dad, had worked. He would come home at the exact same time every day and my Grandmother would have his dinner prepared for him. He would sit alone at "his" place at the kitchen table and enjoy a meal that usually consisted of meat and potatoes. He didn't like rice. Grandmother said he quit eating rice when he got back from Korea.

I always thought of my beloved Uncle as a mild mannered "pencil pusher". He took an early retirement from the steel mill, took care of my ailing Grandmother whom he referred to as his "best friend" and went to work in nearby Bessemer as a Tax Advisor at H & R Block. Grandmother passed in 1996 and Uncle Robert continued to live in the Ensley home most of the time by himself. Sometimes my Dad would live there when he worked in the area.

After by beloved Uncle passed on August 27, 2005 at age 71, 5 weeks after being diagnosed with an inoperable "mass" in his lung and enduring weeks of a whirlwind of doctor visits, chemo treatments, radiation, home health care and my cooking he gave up the fight.

Boxes and bags of family pictures, memorabilia and papers waited patiently at the foot of my bed at my home in Arley after the sale of the Ensley residence. After 3 years I still did not have the guts enough to go through them until a illness in the family forced me to find solace in busywork.

Among the faces of my ancestors and the complimentary wildlife portraits given by the Chevy dealer when the Monte Carlo was bought new I found another treasure. The letters Uncle Robert had written home from his military service at the 38th Parallel when he was stationed in Korea for 2 years were bundled with a rubber band and were among grandmothers treasured things. I was to discover that the mild mannered man who worked behind a desk for all of his adult life was as tough as a pine knot.

He didn't talk much about his military experience other than things like "3 years of college and they sent me around the corner to advanced infantry" or when I questioned him about how he got to Korea, "14 day over there, 14 days back". When he passed I could not find his DD-214 in time to have a flag for him at his service but each day when I raise the flag over my little farm workshop I think of him and all the Americans that have faithfully done their duty by serving our country, most of them in places they would not rather be.

These letters are dedicated the those people and to those people who are somewhere they do not want to be. May you find comfort and camaraderie in the lines he wrote from "This damn hole"...

Love,
Cheryl
Posted by Simple Life Farm at 6:46 AM No comments: 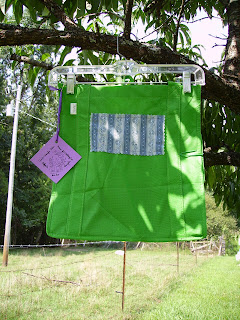 I asked my oldest Niece once, "What is the deal with us girls and our purses?" She replied. "It's our security Aunt Cheryl, we carry all of our stuff in it." Wisdom always makes sense.

Here's a quick project for bringing home some of the stuff from the grocery store.

Directions:
Cut fabric squares and pin to tote bag and stitch in place 1/4 from edge of fabric. Cut place mat to fit bottom if the original support panel is missing

There you have it. A quick and easy tote bag with a homespun touch ready to go the the grocery store.

Tip: I like to designate certain bags for certain stores and hang them by the front door as a reminder to use them on my way out.